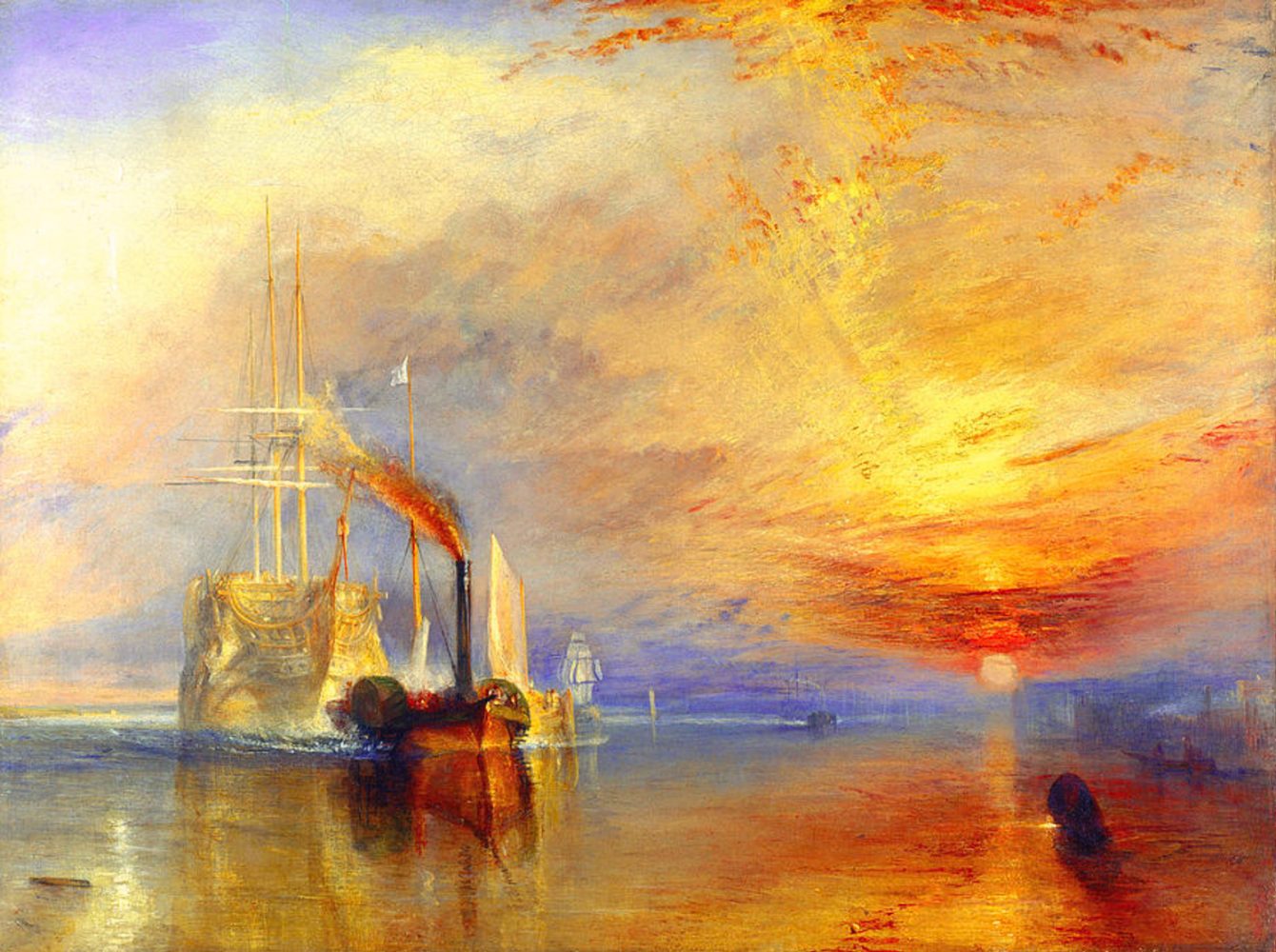 Here at Morgan Marine we love all nautical history and being a relatively small island surrounded by water much of this history is Naval.

One such piece of history is the story of the The Fighting Temeraire…immortalised by William Turner at the 1839 Royal Academy exhibition, which was to become one of his best known works. Now residing at the National Gallery in London https://www.nationalgallery.org.uk this is one of Turner’s best-preserved pictures, probably because he used a relatively standard oil paint mix (instead of the experimental materials he sometimes tried which tended to be unstable and deteriorate over time).

This is no ordinary painting though because unusually it shows the Napoleonic warship HMS Temeraire, affectionately known to the public as The Fighting Temeraire being dragged to her death at a Rotherhide breakers yard. The tug towing the old ship was powered by steam, something that was starting to replace wind in many new navy ships. The sun sets behind the ship (even though they are travelling westwards up the Thames) to underscore the end of an era.

Turner chose this particular ship because the Fighting Temeraire was a celebrated gunship which had fought valiantly in Lord Nelson’s fleet at the battle of Trafalgar in 1805.  The Temeraire was a 98-gun, three-decked ship of the line that had been launched in 1798, during the French Revolutionary War. Her name is a French word that means bold or fearless.

On 21 October 1805, after a relatively undistinguished career, she eventually had a chance to live up to her name, under the command of Captain Eliab Harvey. The occasion was non other than the Battle of Trafalgar. When Admiral Nelson’s flagship HMS Victory came under heavy fire from the French, the Temeraire came to her defence. After a series of daring manoeuvres, and savage fighting she not only saved Nelson’s vessel, but also captured two French ships. Nelson famously died, but the British won the battle. The part played by the Temeraire made her the only ship specifically mentioned in Admiral Collingwood’s despatch on the battle, commended as ‘most noble and distinguished’.

At the end of the battle, the ship was in a dreadful state. She had lost all her upper masts, both quarter galleys, and her poop deck had been badly damaged when the main mast of the French warship Redoubtable fell across it. A long stretch of her hull had been stove in, her rudder-head had been shot away, and she had suffered well over a hundred casualties. She returned to Portsmouth to a hero’s reception however – her exploits had truly captured the nations imagination. Repaired, she served on until 1813, but her hull never really recovered from the damage received in the battle. She was eventually retired from active service, first becoming a prison hulk, and then a ship housing new recruits.

Whilst the painting depicts an event which happened in real life, it didn’t aim to be an accurate record of the Temeraire’s last voyage. Turner wanted viewers of his painting to think about how the Temeraire had served her country in the past, and how Britain now seemed to have turned its back on her.

When he exhibited the picture in 1839, he included these lines in the display:
The flag which braved the battle and the breeze,
No Longer owns her.

Indeed, the Temeraire didn’t fly the union flag any more. Instead, a white flag flies from the mast of the tug showing that the ship was in commercial hands.

However, it also makes the Temeraire look as if she’s being brought in under a flag of surrender, a further insult to her memory.

In reality, the Temeraire looked very different to how she was shown in the painting. Her fighting days had been over for some time. By the time she was auctioned off for the value of her timber, everything that the Navy could recycle had already been removed, including her three tall masts. However, Turner decided to depict the ship with the masts and rigging still in place. He also used white and gold paint, rather than the darker yellow and black that she was in real life. He wanted to show her as a shimmering, noble vessel, fading not just from view but from history. 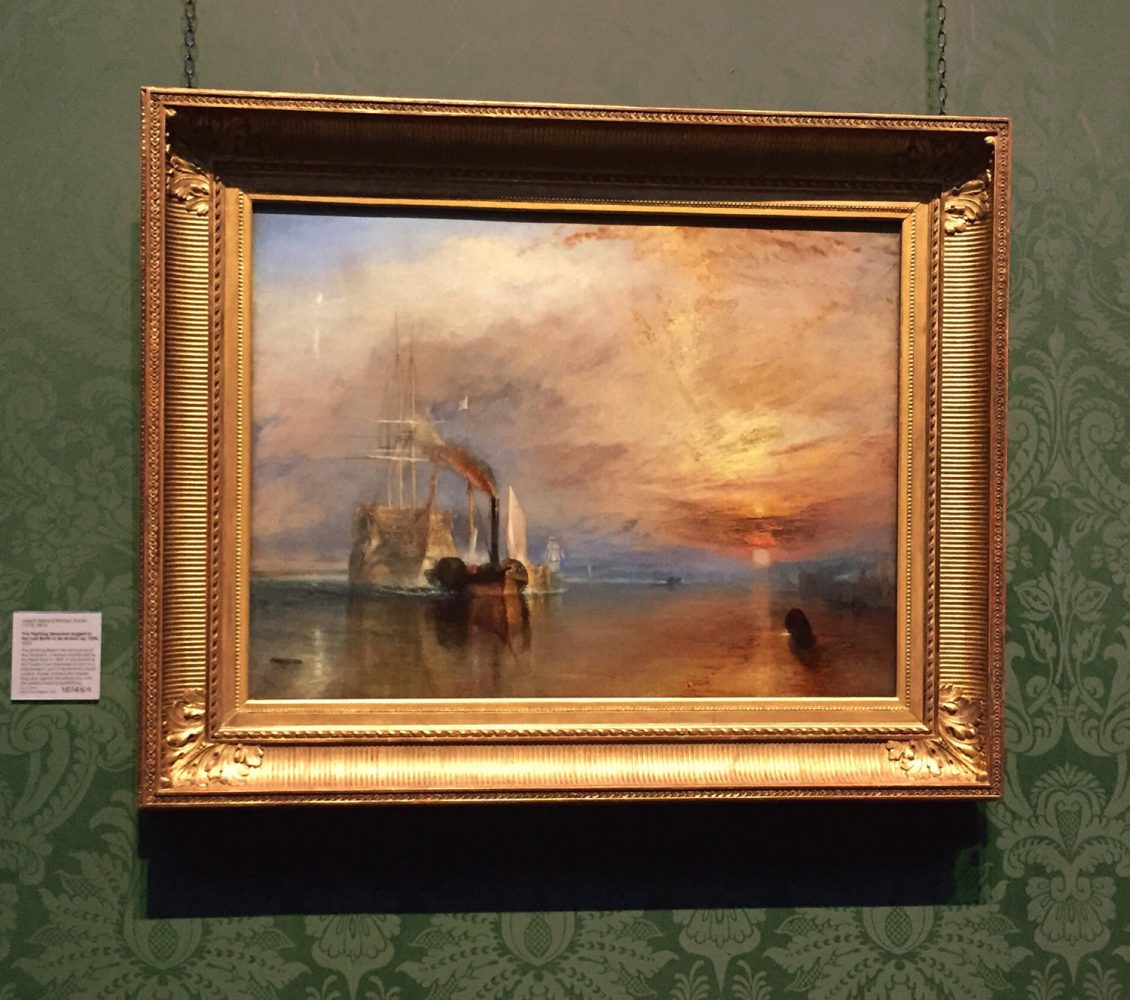 The Fighting Temeraire was broken up long ago, but her image, name and exploits are captured forever in this oil painting at the National Gallery. Appropriately, the main entrance to that building opens onto Trafalgar Square.  https://www.nationalgallery.org.

For more information on Turner the artist, click here: https://en.wikipedia.org/wiki/J._M._W._Turner

(Just as an interesting aside for any James Bond fans, it’s in front of ‘The Fighting Temeraire’ painting in Skyfall (2012) that 007 and his latest new gadgets expert ‘Q’ meet for the first time. The image of the old boat being pulled along by new technology is a significant one within the story of the film. As well as the image of the old boat being tugged along to be eventually broken down referring to Bond’s older age and increasingly precarious role as an agent within MI6! I wonder what Turner would have thought of this, all these years after his painting was first shown?!) https://www.imdb.com/title/tt1074638/