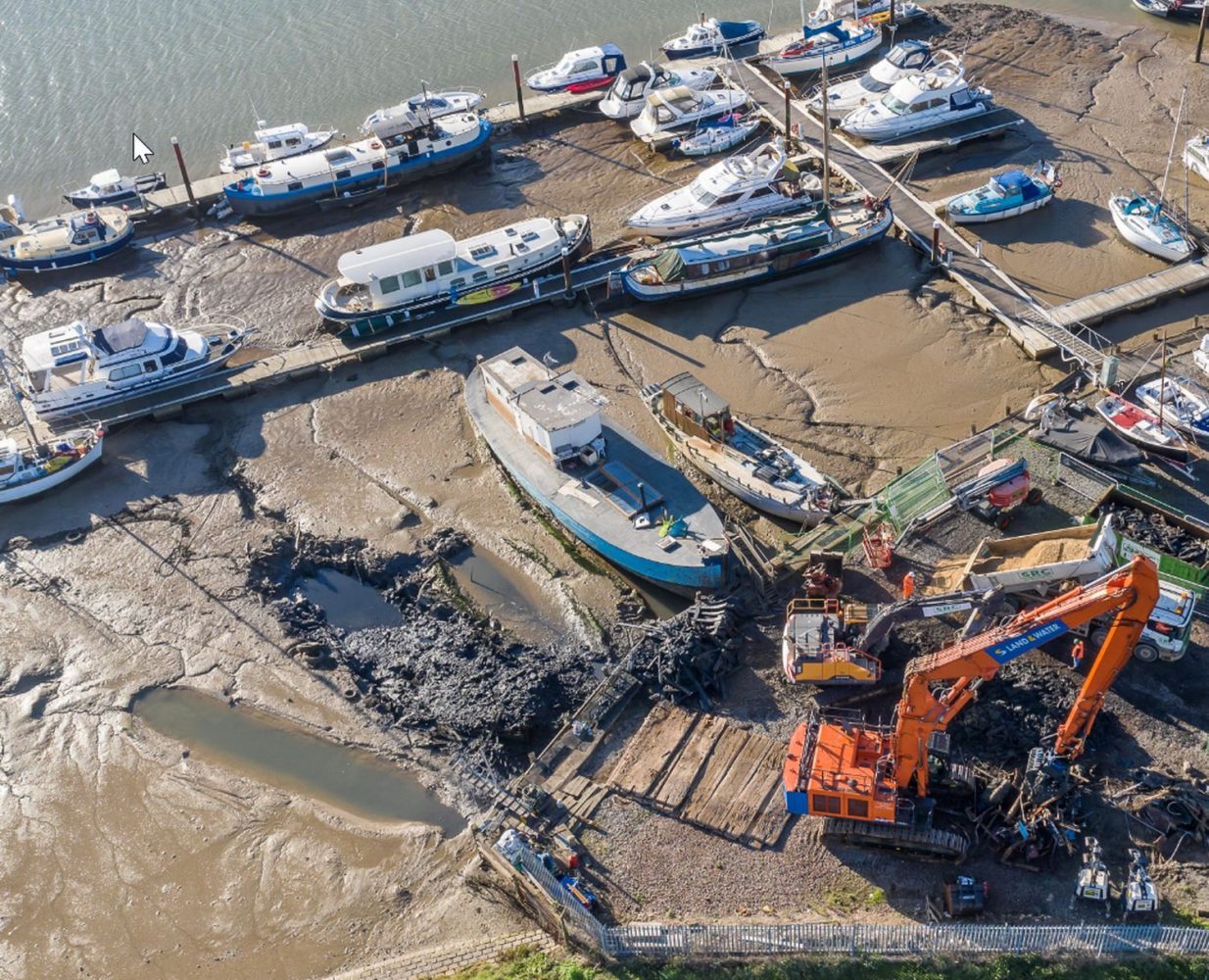 Morgan Marine was left with no choice this week but to take decisive action to remove two sunken motor boats from its marina. The Company had found itself in a difficult position whereby these boats had begun to leak diesel into the watercourse. Once glorious machines, these large vessels had become a danger to our environment. Both boats had lost hull integrity meaning they would no longer float. Each passing of the tide exposed metal fuel tanks and engines systems to the highly corrosive nature of seawater. Anything metal was being quite literally eaten away.

We could have taken the easy approach and said “this is not our problem”. On a Sunday evening, just a few days ago, we received a call from the coastguard, the harbour office, and also visits from members of the public concerned about the leakage of diesel from one of these boats and the severe detrimental effect this could have on our various wildlife habitats – something that we all treasure and enjoy.

We had of course noticed the onset of leaking oils ourselves, and through the good work of our employees, we had taken action to stem the flow. In doing so, we confirmed that the situation was dire. We were quite literally staring down the barrel of a gun, and facing the prospect that the fuel containers in either vessel could rupture at any time. We took immediate action to drain the fuel, but we could do little about residue material – wet hull planks soaked in diesel and oil.

Instead of ignoring this issue and claiming innocence, we took the difficult decision of committing significant expenditure to the professional removal of the severe environmental risk. Our judgement that it was better to take this step than to face widespread pollution to the creek that would affect so much more wildlife than the birds that had traditionally made these boats their seasonal home. We hope that you can agree that this was the right decision to make, that the dire situation was suddenly thrust upon us, that we were left with no choice but to take decisive action, and that we did what was right for our environment. We did not ask for this situation, we did not plan for it, and we did not need it.

We care about our environment which is why we have acted in the responsible manner that we have, putting nature first ahead of cost consideration. We have plans to improve the local wildlife habitats, creating increased and sustainable environments for the nature that we all so much enjoy.

We take our hat off to the supportive approach of all of our customers who have been significantly inconvenienced through this urgent action, and we thank everyone for their support.

Just to confirm safe receipt of my new tender and to thank you and the team for efficiently getting everything sorted!I’m delighted with the new purchase and can not wait for the summer!I am sure we will do business again in the future.
It’s a pleasure doing business with you and I’m sure Morgan Marine will flourish with your genuine / honest approach to business.
I feel that I must say, that your never ending helpfulness, customer focus and down right hard work  is very much appreciated
Thanks for all your help and the very nice work to the bow of the boat.
Thank you for the very efficient and professional service provided on the 16/3/2021 which included collection from morning, hoist out power wash, lowering both masts and hoist on to a transporter.  All done with the minimum of fuss by a very cheerful staff.
Our huge thanks to the Morgan Marine team - an amazing experience from start to finish - even the challenging delivery!
Many thanks to Morgan Marine for doing the right thing for the environment and wildlife. If only everyone would do the same.
Lovely to meet you and we would like to thank you very much for your time and expertise over the past couple of days. For us it was invaluable and certainly made the trip over very worthwhile.
Cheers for the work you guys did on my Dory.  The engine runs lovely now - thanks!
Many thanks again for all for your hard work in brokering the deal and delivering the boat. All greatly appreciated.  I hope restrictions ease quickly and you have a great summer.
Thanks for your continued efforts - the service and level of contact is not seen enough these days - you are the exception.
Thanks to all at Morgan Marine for your help over the last year or so. Your guidance, advice, service and support has been first class.
I'd just like to thank you for all your help over the last few years. You've always been very nice to deal with. I wish you the very best for the future.
Port of London Authority
Firstly, could I thank you for your support in supplying and arranging for the installation of the Honda outboard engines for our small survey craft Galloper. Could you also pass our thanks to Will and Sam please for their efforts yesterday in completing the installation in one visit, they were very professional in their approach and we are very happy with the installation.---Port of London Authority
Many thanks for your excellent service and good luck to the 'Jenny Wren'.
Without a doubt your finest feature is the helpful and kindly nature of your yard-men who deal with the boat lifting and re-launching. These chaps remain cheerful in the most awful weather and are the most efficient that I've come across in almost 30 years of boating. Their handling of the boat lift is a joy. Please pass on my appreciation to them.
I am so appreciative of all your efforts and hard work.What stars you are (and always have been).
This looks great. Looks like a very neat and professional job.
Thank you very much for your assistance in this matter All documents receivedA pleasure to find a company who cares!
Fabulous service. Great advice and always keen to help.
prevnext